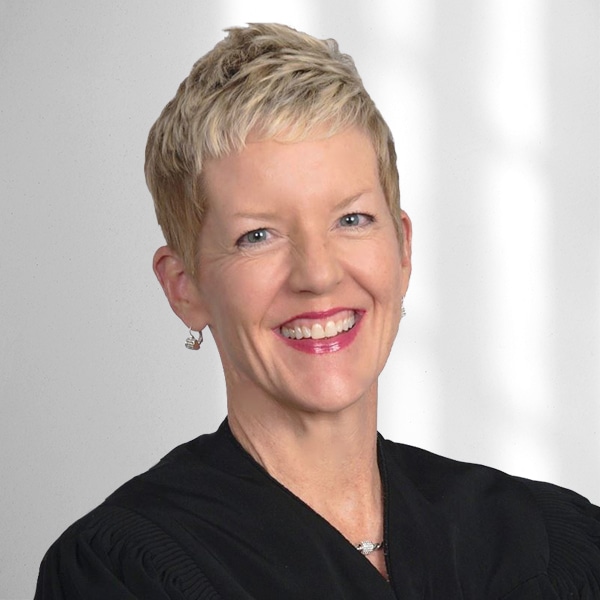 X = Unavailable
Availability Scheduling and Exception
Anderson, Emily has no availability and scheduling exceptions.
Return to Arbiter Profile
November 2022
December 2022
January 2023
Short Notice Availability - (90 days or less)
For available dates beyond those shown below, please contact a JAG scheduling clerk at 303-572-1919 or 1-800-ARBITER (272-4837)
Available dates shown below are informational only and are subject to immediate scheduling via telephone, and thus, may be unavailable. To verify and hold dates, contact a scheduling clerk.
JAG's Automated Cancellation Notification Tool
Interested in scheduling an arbiter last minute? With JAG's Cancellation Notification Tool, you'll receive an automated email each time one of your favorite arbiters has a cancellation. Call Michele Zeigler at 303-572-1919 to sign up.

Emily E. Anderson is the first woman to preside as the Chief Judge of the 17th Judicial District, serving Adams and Broomfield Counties. She has served as a district court judge since 2013, having previously been a magistrate in the 17th JD and Denver County Court. Prior to her judicial appointment in 2005, Judge Anderson ran her own law firm for eleven years. Her private trial practice focused on family law, civil litigation and mediation. As an attorney, she fought tirelessly for the rights of LGBTQ persons. In 2006, The Center on Colfax honored her at their annual Jokers Jewels & Justice event for her past service on the Board of Directors, as Chair of the Legal Services Committee, as a volunteer for the Colorado Legal Initiatives Project and for her many years of service to the LGBTQ community.

Judge Anderson is active in the legal community having served in numerous leadership positions in the Colorado Women’s Bar Association, the Colorado Bar Association and the LGBTQ Bar Association. She served on the CWBA board for 13 years and the CWBA Foundation Board for 8 years. Judge Anderson co-chaired the CWBA Convention Committee four times! She recently completed her terms as the District Director for the National Association of Women Judges, the Juvenile Services Planning Committee and the Access to Justice Committee in the 17th JD. She currently serves on the Chief Judges Council, Executive Committee for the 17th JD, the Executive Council for the new Judicial Peer-to-Peer Coaching program and the Colorado Supreme Court Disciplinary Review Board. Judge Anderson is committed to promoting judge and lawyer well-being. She has been a volunteer for the Colorado Lawyer Assistance Program (COLAP) since its inception and served on the board of Colorado Lawyers Helping Lawyers (CLHL) for 8 years. Judge Anderson was the recipient of the Colorado Judicial Institute’s Judicial Excellence Award in 2013. She earned a BA in Fine Arts from the Colorado College, Cum Laude, in 1986 and her J.D. degree from The University of Denver College of Law in 1989. She and her wife, Patricia M. Jarzobski, just celebrated their 31st anniversary and live in Westminster with their golden retriever, Brandi.